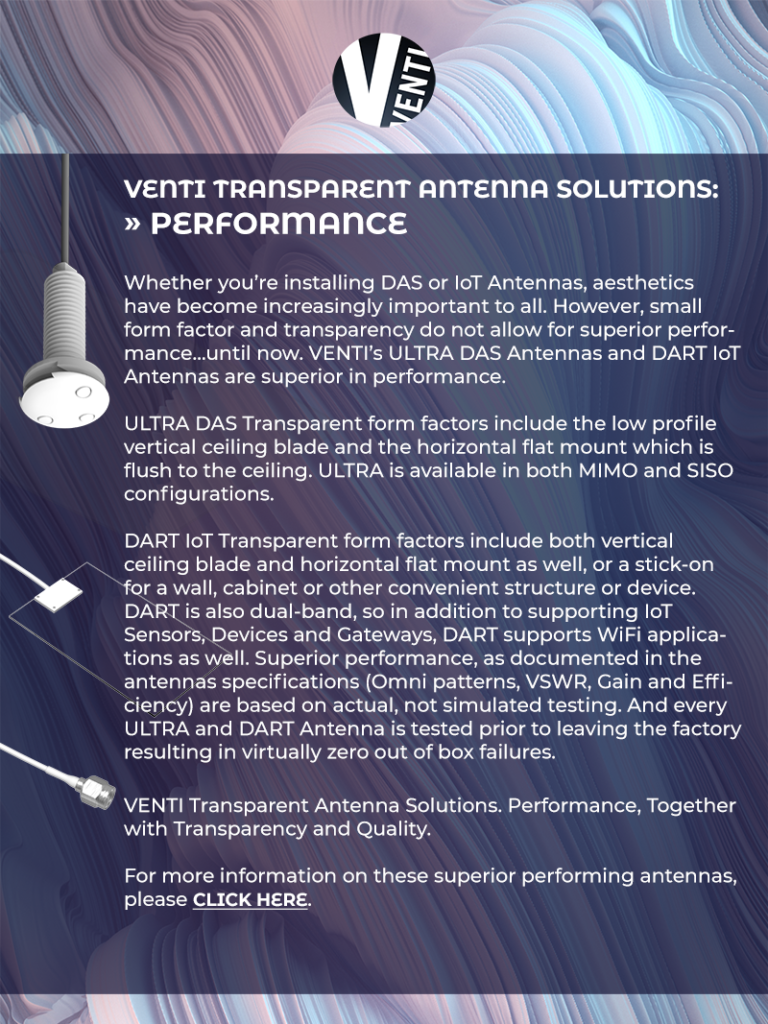 Whether you’re installing DAS or IoT Antennas, aesthetics have become increasingly important to all. However, small form factor and transparency do not allow for superior performance…until now. Venti’s ULTRA DAS Antennas meet all carrier requirements, and together with DART IoT they are superior in performance. ULTRA DAS Transparent form factors include the low profile vertical ceiling blade and the horizontal flat mount which is flush to the ceiling. ULTRA is available in both MIMO and SISO configurations. DART IoT Transparent form factors include both vertical ceiling blade and horizontal flat mount as well, or a stick-on for a wall, cabinet or other convenient structure or device. DART is also dual-band, so in addition to supporting IoT Sensors, Devices and Gateways, DART supports WiFi applications as well. Superior performance, as documented in the antennas specifications (Omni patterns, VSWR, Gain and Efficiency) are based on actual, not simulated testing. And every ULTRA and DART Antenna is tested prior to leaving the factory resulting in virtually zero out of box failures. Venti Transparent Antenna Solutions. Performance, together with Transparency and Quality. 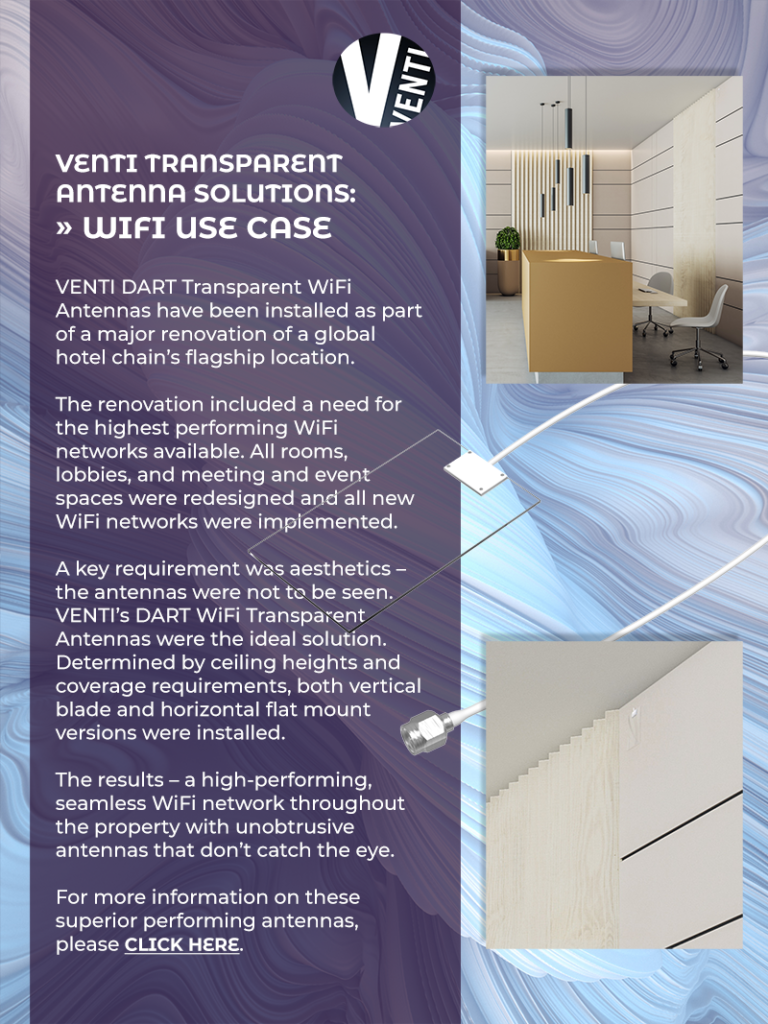 VENTI DART Transparent WiFi Antennas have been installed as part of a major renovation of a global hotel chain’s flagship location. The renovation included a need for the highest performing WiFi networks available. All rooms, lobbies, and meeting and event spaces were redesigned and all new WiFi networks were implemented. A key requirement was aesthetics – the antennas were not to be seen. Venti’s DART WiFi Transparent Antennas were the ideal solution. Determined by ceiling heights and coverage requirements, both vertical blade and horizontal flat mount versions were installed. The results – a high-performing, seamless WiFi network throughout the property with unobtrusive antennas that don’t catch the eye. 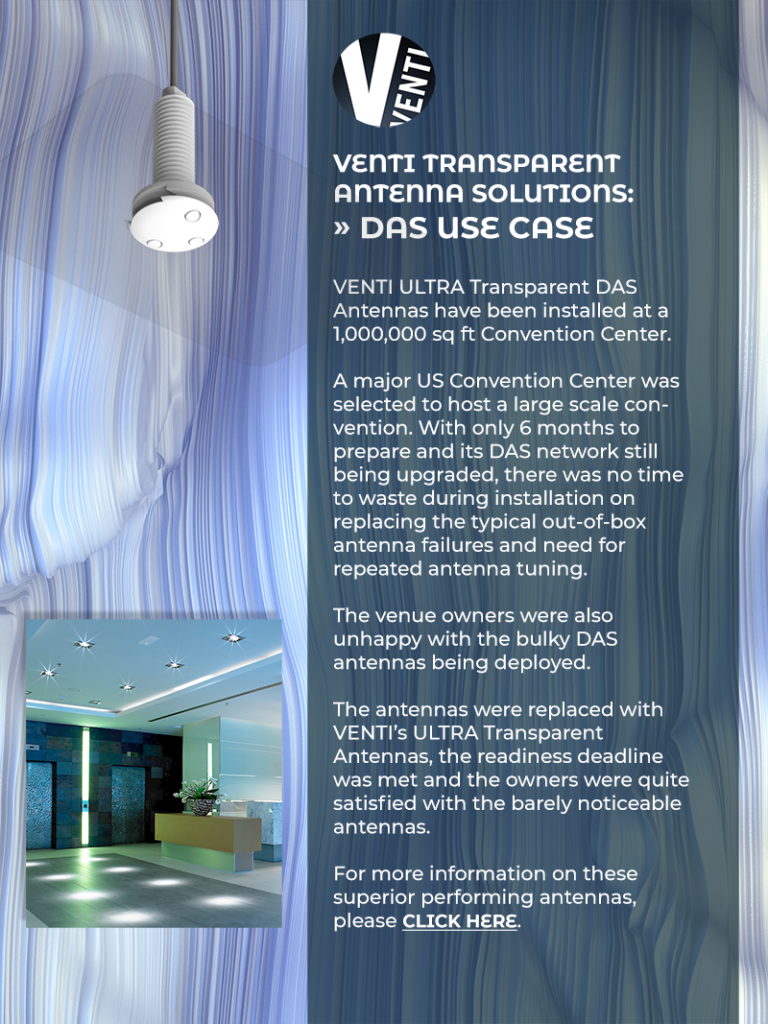 VENTI ULTRA Transparent DAS Antennas have been installed at a 1,000,000 sq ft Convention Center. A major US Convention Center was selected to host a large scale convention. With only 6 months to prepare and its DAS network still being upgraded, there was no time to waste during installation on replacing the typical out-of-box antenna failures and need for repeated antenna tuning. The venue owners were also unhappy with the bulky DAS antennas being deployed. The antennas were replaced with Venti’s ULTRA Transparent Antennas, the readiness deadline was met and the owners were quite satisfied with the barely noticeable antennas. 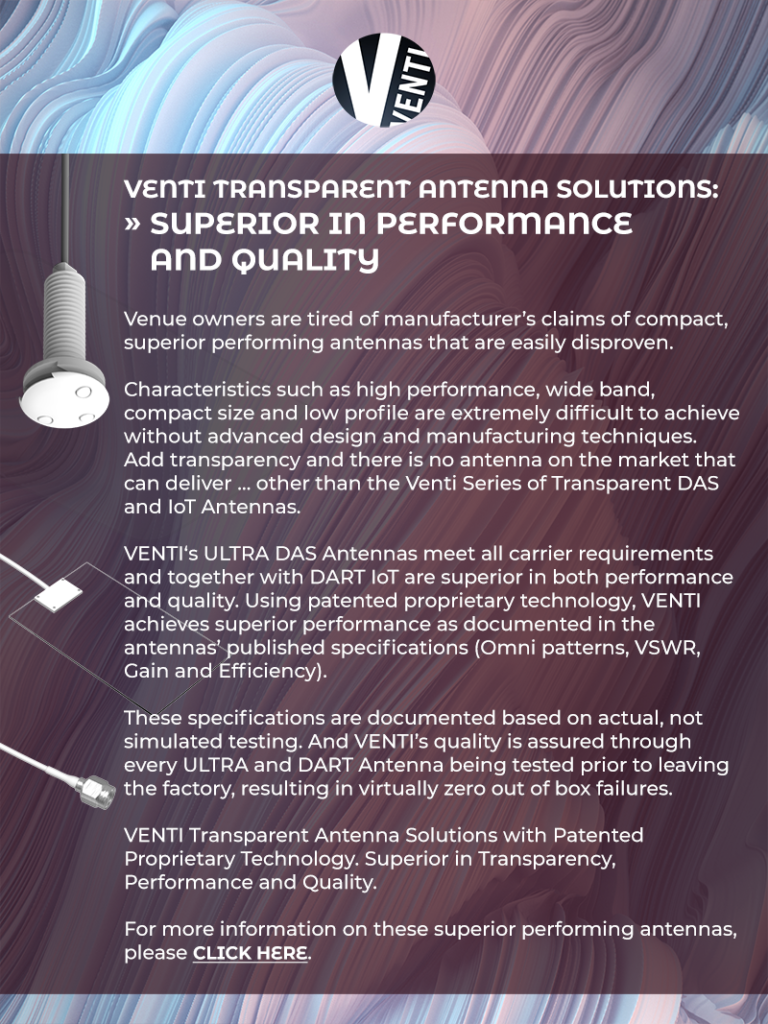 Venue owners are tired of manufacturer’s claims of compact, superior performing antennas that are easily disproven. Characteristics such as high performance, wide band, compact size and low profile are extremely difficult to achieve without advanced design and manufacturing techniques. Add transparency and there is no antenna on the market that can deliver…other than the Venti Series of Transparent DAS and IoT Antennas. Venti’s ULTRA DAS Antennas meet all carrier requirements and together with DART IoT are superior in both performance and quality. Using patented proprietary technology, Venti achieves superior performance as documented in the antennas’ published specifications (Omni patterns, VSWR, Gain and Efficiency). These specifications are documented based on actual, not simulated testing. And Venti’s quality is assured through every ULTRA and DART Antenna being tested prior to leaving the factory, resulting in virtually zero out of box failures. Venti Transparent Antenna Solutions with patented proprietary technology. Superior in Transparency, Performance and Quality.

VENTI Group uses cookies to give you the best experience. If you continue, we will assume that you are OK with it.OKNO