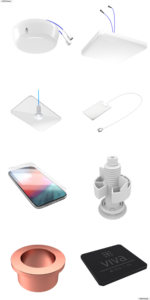 VENTI Group provides a Broad Portfolio of Patented Product and Licensing Solutions. Designed to improve the Performance of Smart Devices, Structures and Networks, including:

Henry (Hank) Adamany
Hank is the CEO of VENTI Group. He has successfully launched and grown numerous professional services and product businesses at both UNISYS and Price Waterhouse (now PricewaterhouseCoopers). At PwC, Hank built several businesses; his most successful team created and advanced the B2B practice to more than $450 million in revenues in less than four years. He has also co‐authored two business books published by IRWIN Business Publications. Hank oversees VENTI Group Operations, Planning, Sales, and Finance activities. Hank is a co-founder and significant investor in VENTI Group.

Tony Eichenlaub
Tony is the Director of Technology & Engineering at the VENTI Group. As a successful tech executive who built and sold his own company, Tony has launched several new products that have become mainstream businesses in the consumer electronics and consumer products fields. In collaboration with VENTI Group engineers, Tony identifies and leads the development of all Venti technologies. Tony manages VENTI’s Development and Engineering teams as well as Venti Group global patent portfolio. Tony is a co-founder and significant investor in VENTI Group.

Robert Mark
Robert is the Vice President of Sales & Marketing for VENTI Group. Robert spent 18 years working with a number of leading edge Silicon Valley tech start-ups establishing and growing their market presence based on driving sales of innovative hardware, software and services. Each of the companies Robert worked with had successful exits for their investors either through an IPO or an acquisition. Most recently Robert spent 3 years as Director of Global Accounts in HEWLETT-PACKARD (HP) Software Division. Robert is a significant investor in VENTI Group.

Engineering Team VENTI Group employs inventors and engineers comprised of leading RF designers totaling over 65 years of combined experience. They are the industry “troubleshooters & designers” for advanced antenna & sleeve systems. They are known for their practical use of advanced technology to solve complex field requirements, turning them into functional and practical solutions. Antenna & sleeve design, manufacturing and deployment as well as strong numerical modeling and laboratory validation techniques are part of their core strengths. VENTI Group design engineers are experienced in product development for a mass production environment.

Ludovic Bainvel Ludovic is the Creative & Marketing Director of VENTI Group. He is truly a visual artist that has helped propel many businesses, both major corporations as well as start-ups, into the forefront of their market. Ludovic’s background begins with a degree in Art History from the World-renowned La Sorbonne. He began his professional career at FUSE, an advertising firm in Southern California. He fine-tuned his skills of marketing, advertising and visual presentation of both corporate identity and business. He finally reached the status of Creative Director by opening the firm of INDEPENDENT Creative. His many national awards, including the prestigious Gold Clio Award and many Addys confirm his talent in advertising, marketing and corporate identity.